Before the Wisners, There Were Others.

In 1825, Nathaniel Mack, no apparent relation to Stephen Mack, purchased an 80 acre parcel of land from the US government. In subsequent years the parcel was sold first to J. Annibal or Annible, and then to an S. Moon. We know very very little about these three early owners.

In 1835, the land was sold in its entirety to Joshua Terry, who owned the 80 acre parcel just east of Moon’s.

But was it only Joshua, or did he have friends?

In the early 1830s and 1840s, land speculation was as important to early residents as farming or establishing towns. It was a way to raise cash, which was not easy to come by in those times. It wasn’t at all uncommon for these folks to pool their resources and invest heavily, with the hope of a good payout when the land was sold. Commonly the title or deed would not reflect these investors, but only one person, acting as a trustee.

And so we come to an 1841 announcement printed in the Pontiac Jacksonian, where it appears we not only have several people involved in the purchase made by Joshua, but it looks like they weren’t making their payments. The land was nearly sold at a sheriff’s sale: 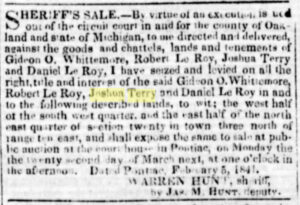 Joshua Terry was an investor, a farmer, a deputized sheriff, and held several positions in early Oakland County and Pontiac.

Daniel LeRoy was a member of the Pontiac Company and was very prominent in the history of Michigan, serving as U.S. District Attorney for Michigan from 1826-34, as a member of the Michigan territorial council from 1830-31, and as Michigan state attorney general from 1836 to 1837. If politics hadn’t reared its ugly head, he likely would have been our first governor. Robert LeRoy was his son. The LeRoy family were resourceful and very involved in land speculation and ownership.

Gideon Whittemore was a prominent lawyer and early judge in Pontiac. His family was large and influential. He later went on to found Tawas City.

As an aside, in an 1875 article from the Pontiac Weekly Gazette, the early history of Lapeer County is laid out, with a little connection to some of our friends:

What does this have to do with Pine Grove? Not much, but it does show that Terry, Whittemore and LeRoy had been working together since the early 1830s and it establishes that the Pine Grove property was prime real estate along a well known route, attracting several investors.

In 1837, Moses, age 22, is a farmer in Lapeer County and doesn’t like it, although his eye for land speculation was pretty darn good, because in that year he purchased 480 acres of land in Genesee County and in 1839 purchased an additional 80 acres. Not bad for a guy that doesn’t like farming. It’s not clear if he sold this land before moving to Pontiac in 1839. His biographies explain that he did not like the farming profession, explaining his dislike of “farming rocks”.

By 1839 he had moved to Pontiac and came under the tutelage of his brother George, a practicing attorney and well known newspaper editor and owner. Moses took to this like a duck to water and by the early 1840s he had established himself in his brother’s firm and was trying cases.

1844 probably started off as a great year for Moses. He was established in his occupation, had resources at his disposal, and had a baby on the way. And then July happened.

On July 2, 1844, Moses purchased that 29 acres from Joshua Terry. He paid $1,000 for the property, which, if land values were holding steady at the time, should have been worth about $10.00 per acre or about $290.00. This inflated land value is our only indication that the property had been improved. In other words, Wisner paid for a farm, not a piece of land.

On July 24, Eliza Wisner gave birth to a daughter, Hellen. Five days later, Eliza passed away, and a few days after that, Hellen died. In the aftermath of this tragedy, Wisner moved away from his little farm and concentrated on building his law practice and acting as a prosecuting attorney in Lapeer County.

He stayed in the Genesee or Lapeer County areas until 1848, when he married his second wife, Angeolina, the daughter of Charles Hascall of Flint. From letters in our collection, she was a hard sell and likely motivated Wisner to improve the property in Pontiac to provide his family and new wife with a good home.

Their marriage is the beginning of the expansion and improvement of the Pine Grove property, into what would grow to about 190 acres by 1862.

This map shows the property as of that year. The blue area is the original 29 acre parcel, the green area is a 75 acre field, and the orange area an 80 acre field.

Note that these are approximate parcels. Here’s the description of that 79 acre field to explain why:

Loosely translated to English and feet:

An 1872 map of the Wisner holdings. The shaded areas reflect the property as it was in 1862.

Just for fun, here is a modern view of the property showing the 1862 boundaries. 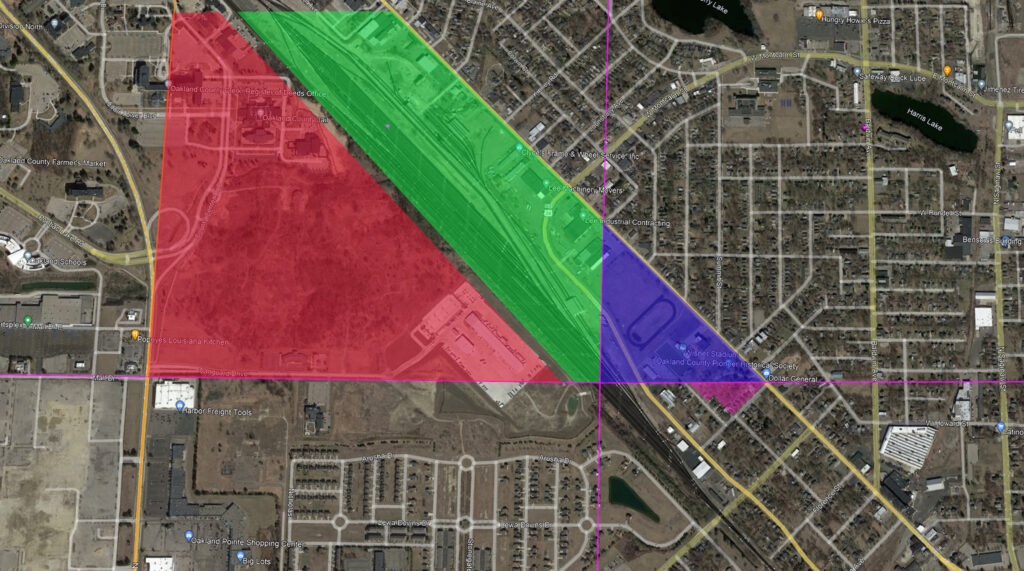 The 1862 property boundaries on a satellite view.

After his death in 1863, his wife Angeolina retained only the original 29 acres, keeping the house and outbuildings as a second home. She sold the rest of the acreage, possibly to pay Wisner’s debts.

The house and grounds remained in the possession of the Wisner family and their descendants, who hired caretaker families like the Kath family. In the early 20th century the property shrank again, this time from from 8 acres to about 4, when the neighboring Wisner School was built in the early 1900s.

In 1945 the Oakland County Pioneer Society, and the Oakland County Veterans Foundation (they shared a number of members) pooled their resources and purchased the property from Florence Wallace, Moses Wisner’s granddaughter. Her hope was that the site would be maintained as a historically significant site, and the following years brought that hope to life.

Over the years, there have been some changes like the addition of the schoolhouse in 1965, the reconstruction of Wisner’s barn on its original foundation in the 1980s, the addition of sheds in the 1980s, an expansion of the carriage house in 2000, and a gazebo in 2019. But the core remains – the outbuildings such as the smokehouse and root cellar are in their original locations. The ice house, lost for decades under the turf, can now be seen.

The house remains very much as it was in 1945 when the historical society purchased it, with some changes, mainly to heating systems and making the electrical systems safe.

For a long period of time the house was the headquarters of the society.  When the house was purchased, a number of original “Wisner” pieces were acquired by the society, including most of the objects in the formal parlor. Over time the house has been furnished with donations from surrounding local communities and today is furnished in an 1880s Victorian style.